This past week featured an exciting and celebratory Tuesday for PSC staff. We had the opportunity to attend the CMU Mellon College of Science Staff Awards Ceremony, an annual celebration of staff achievements and a chance for us to recognize one another’s extraordinary accomplishments. Of course, this year it has been more important than ever to take time for staff recognition, and our colleagues in the Mellon College of Science went above and beyond to deliver a fun and engaging virtual ceremony. Not to mention, PSC staff won big at the ceremony! Nominees for the awards were from across the Mellon College of Science, which includes biology, chemistry, mathematics, and physics. We have an impressive group of colleagues, and enjoyed supporting all of the nominees and winners across all departments. Here’s a bit more about our incredible PSC award recipients.

To kick off the ceremony, Dean Rebecca Doerge first recognized faculty and staff across the college with 5+ years of service at the university. PSC has a proud record of strong staff retention, so it was no surprise that many of our team members were named during this portion of the event. Pictured here is a full listing – we want to give a special shout out to Joel Welling and Kathy Benninger, who have 35 years of service this year! They’ve been working with Carnegie Mellon and PSC for as long as PSC has been serving the research computing community – a truly tremendous accomplishment. 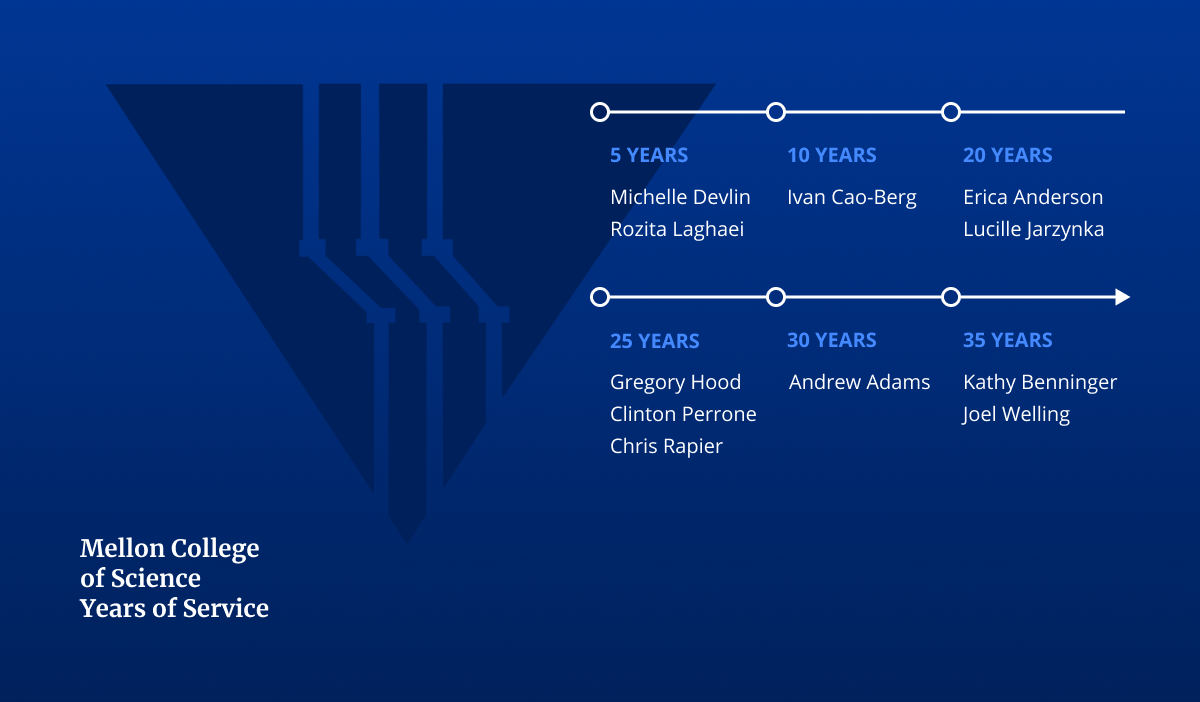 Our first award win of the day was the Research Award, which went to the HuBMAP Data Release Team. Nominated by Phil Blood and supported by Shawn Brown and Alex Ropelewski, this team was recognized for their massive coordinated effort in preparing for and successfully supporting the Human BioMolecular Atlas Program’s first data release this past year. HuBMAP is a National Institutes of Health-supported project that is working to build a 3D atlas of the human body, and PSC plays an integral role in supporting the infrastructure of this massive project. 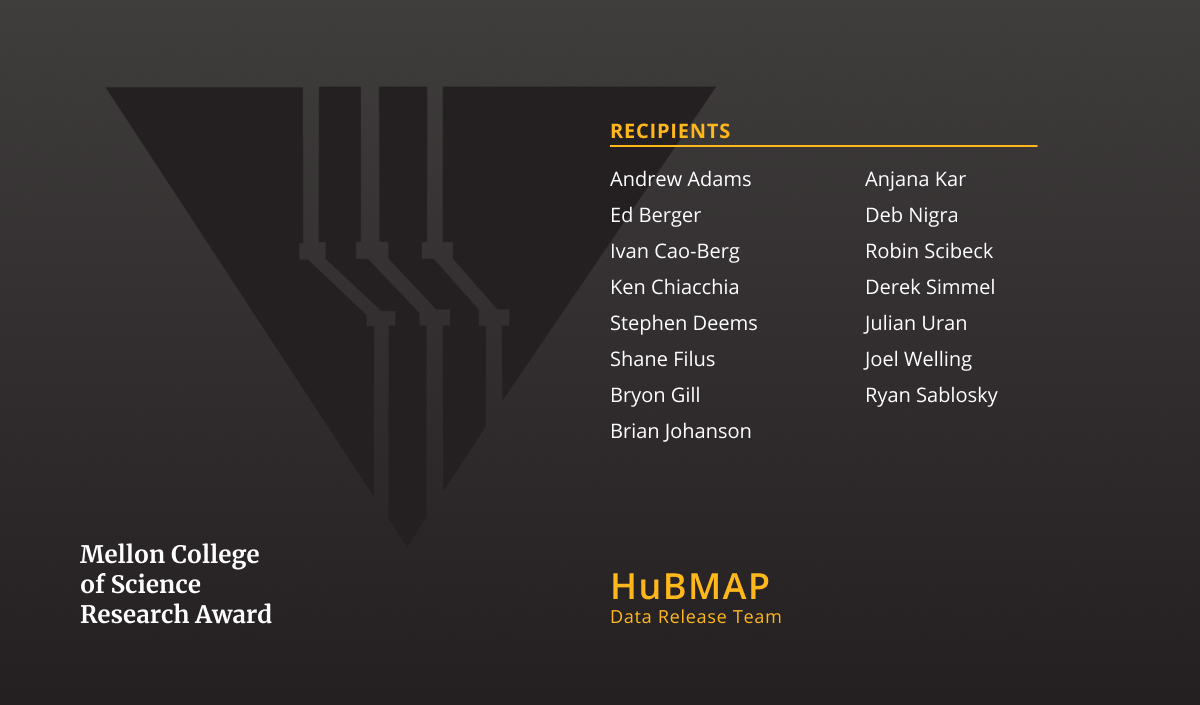 Next up, the Dean presented the Outstanding Achievement Award, which went to our Bridges-2 and Neocortex deployment team! Director Shawn Brown nominated the team, comprising another huge proportion of our staff, for their work over the past year to stand up two world-class supercomputing resources. Both are now available to the research community, with Bridges-2 in full production and Neocortex in the midst of its Early User Program. The team was recognized for its perseverance during COVID-19 and its continued commitment to collaboration and innovation. 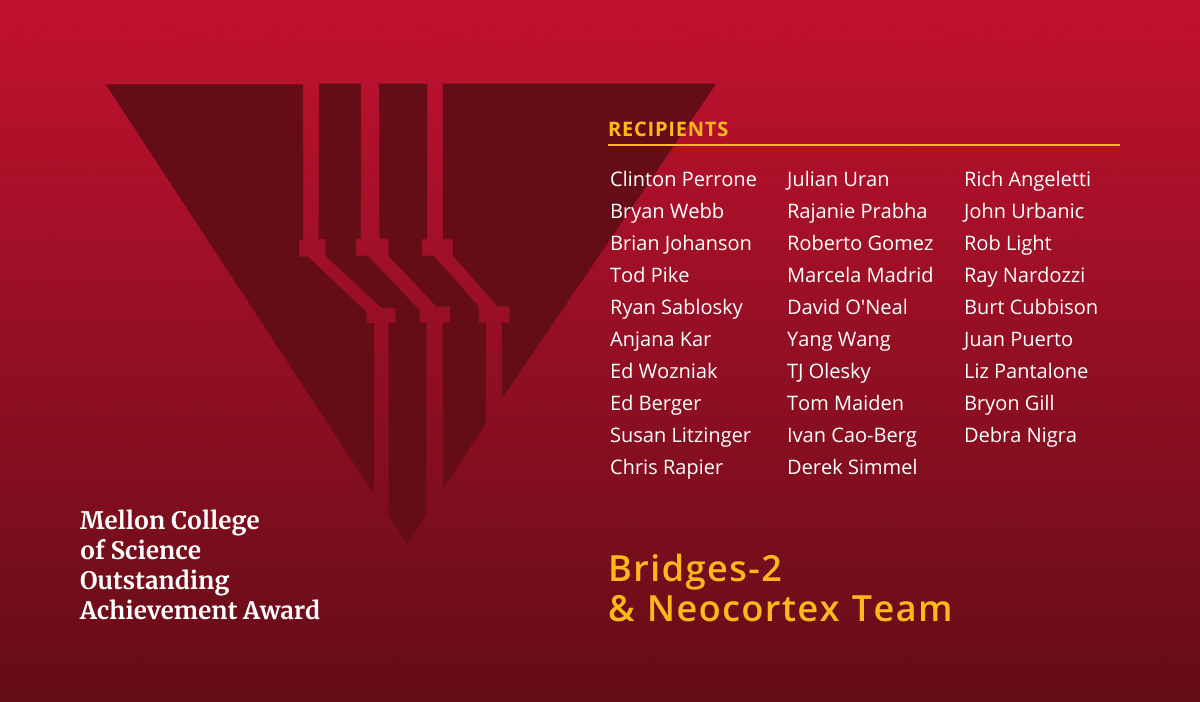 Finally, two individual PSC team members were honored for their commitment to excellence in some very competitive categories! We were so impressed with all of our Mellon College of Science nominees, and are proud to be part of an institution full of such dedicated individuals.

Ryan Sablosky, Virtualization Infrastructure Engineer, was given the Senior Rookie Award. This award goes to an individual with demonstrated knowledge and experience, who has gone above and beyond in a short time of less than two years of service at MCS. Ryan was nominated by Ed Hanna, who gave remarks at the ceremony about Ryan being a wonderful addition to the team who contributes in numerous ways. Ed reflected that he feels extremely lucky to have Ryan, and the rest of PSC feels the same! Congratulations, Ryan!

The last big win of the day for PSC was for the Merit Award, which is the biggest honor of the year. The Merit Award recognizes a staff member who, over an extended number of years, has made significant contributions to their department and the college, and served as an integral part of their team. We couldn’t think of a better winner than our very own Brian Johanson. Brian, a Senior HPC System Administrator, has been with PSC for 22 years, and has served as the lead or co-lead on 6 of our systems. As Brian’s supervisor Ed Hanna explained in his heartfelt remarks, Brian has been a valuable contributor, team player, and leader at PSC throughout his time at the center. Ed shared that Brian has been “an honor to manage,” and a true asset to the team through thick and thin. Congratulations to Brian on this honor and thank you for being such an integral part of our team!

We are proud of the entire PSC staff for a great showing at the MCS awards and for taking home so many honors. Thank you to those staff members who nominated their colleagues and made sure so many of our staff got their time in the spotlight! We wanted to take this opportunity to give a special thank you to Susan Litzinger, who served as the PSC representative on the staff awards committee this year. Susan is an advocate for her colleagues, a wonderful teammate, and her work on this committee ensured that the ceremony was a success for all. Thank you, Susan, for all of your hard work! We can’t wait to see what the next year holds.