Initial Report Uses Simulation on Bridges for a Finer-Scale Look

at Stresses Leading to TBI

Whether from auto collisions, sports impacts, battlefield injuries or other causes, traumatic brain injury (TBI) is a major cause of disability and death. More than 150 people in the U.S. die each day from injuries that include TBI, according to the Centers for Disease Control and Prevention. Engineers could design better ways of protecting us from TBI if we understood better how sudden shocks to the head translate to damage to nerve fibers in the brain. A team led from Robert Morris University used PSC’s Bridges platform to simulate head injuries at a higher level of detail and under more conditions than before, identifying key factors in causing strain to brain tissues.

Whether you’re a professional athlete, a military serviceperson in combat or a member of the general public, you need to protect your head. A mountain of evidence now supports the idea that what doctors might once have dismissed as a “minor concussion”—or even shocks to the head causing no obvious injury—can cause silent damage to the brain. After time, especially if it happens more than once, this silent damage can build. The end result can be a number of symptoms including loss of coordination, memory problems, seizures and even death.

“We’re part of a very large collaborative team [across nine universities] funded through the Office of Naval Research … It’s a great group, because everybody works in different aspects of traumatic brain injury, from in-vitro studies of nerve cells to helmet design to my focus, which is computational modeling.”—Rika Carlsen, Robert Morris University

Despite a lot of research to understand TBI, we’re still in the early days of unraveling its mysteries. Previous methods for estimating damage to the brain just aren’t detailed or comprehensive enough. That’s why Rika Carlsen of Robert Morris University and colleagues at Brown University and the University of Wisconsin-Madison performed one of the most detailed and thorough series of computational simulations of brain injury to date to identify the type of head motions that are the most injurious. To run the massive, repeated simulations needed to tease out important factors for brain injury, they turned to the National Science Foundation-funded Bridges platform at PSC. 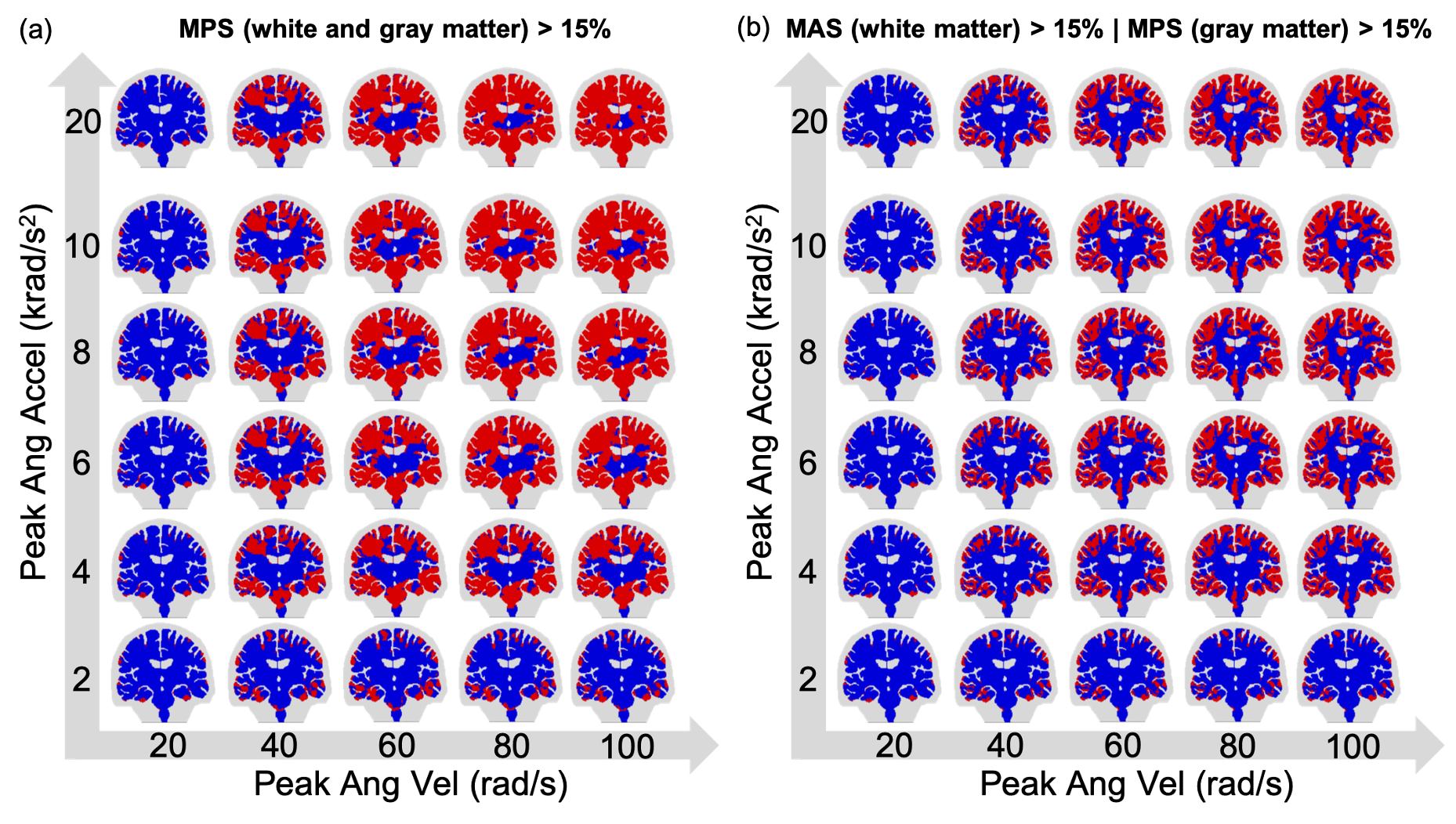 The scientists’ simulation of damage-causing strain to brain tissues for sudden movements in the coronal direction (swaying the head from shoulder to shoulder). When using a measure that didn’t take into consideration the directions of the nerve fibers versus the direction of the strain (MPS, in figure a), the estimated damage (red) was more extensive than a measure that took nerve-fiber direction into account (MAS, b).

Carlsen’s team used finite element analysis (FEA) to simulate the brain being stressed by a number of movements. This method splits the brain into pieces, so that the computer can do the math on individual pieces and then assemble these pieces into the whole brain. FEA is a way of approximating the entire brain. It’s not an exact solution, but reduces the size of the computation so it’s possible with modern supercomputers.

While previous FEA simulations of brain injuries were in three dimensions, computing limitations forced them to split the brain into a small number of relatively large pieces. By splitting the brain into two-dimensional slices with 10,000 pieces, Carlsen’s team was able to incorporate a high level of anatomical detail into their models without a significant increase in the computational cost. They used this 2D simulation to look at how abrupt angular motions of the head—sagittal, as if nodding “yes”; axial, or shaking the head “no”; or coronal, swaying the head from shoulder to shoulder—affected the strain on nerve fibers. This allowed a finer resolution. They also repeated these simulations about 600 times, changing a number of factors to see how the virtual brain’s tissues were stressed in each “injury.” Bridges offered the power and speed that they needed for these repeated large simulations. Unusual for a supercomputer, Bridges also offered compatibility with Abaqus, the commercial software used in earlier versions of the simulation. That meant they wouldn’t have to re-program.

“PSC helped me build upon the resources that we have at RMU, allowing me to run a large-scale computational study like this one. The ability via Bridges to be able to submit jobs and run through a large number of parameters, conducting simulations in sequence, is on its own a big advantage. It just sped up the research process.”—Rika Carlsen, Robert Morris University

The simulations identified both angular velocity (how fast the head is moving at an angle) and angular acceleration (the rate at which that velocity is increasing) as being important for predicting strain on brain tissues. Mapping their predictions to clinical measurements in papers by other researchers, Carlsen and her collaborators found that concussive sports injuries generally have higher predicted strain and strain rate in the brain than sports impacts that didn’t cause concussion. This was an important real-life test that their simulations are on the right track. But the scientists will have to carry out more work to predict the extent of brain injury accurately.  There may be other important factors or combinations of factors the scientists weren’t simulating, which will be the focus of future work.

Different parts of the brain may be affected differently by the same movements. The nerve fibers in the white matter of the brain are more or less aligned in parallel but the gray matter does not contain aligned fibers. A measure of strain that takes these directions into account—called maximal axonal strain, or MAS—may be a better gauge of brain damage for the white matter. On the other hand, a simpler measure that takes into account the maximum strain in any direction—maximum principal strain, MPS—may capture damage to the gray matter adequately. In the Bridges simulations, using MAS versus MPS predicted different extents of damage from the same head movements. Future investigation will determine when each measure is appropriate.

The team reported their results in the journal Brain Multiphysics in March 2021, which you can read here. Their initial findings encourage Carlsen and her colleagues that rapid prediction of brain injury with computational head models will be possible, offering engineers critical data on what kinds of shocks to the head their protective measures need to guard against. Upcoming work will include taking their detailed model to three dimensions, possibly simplifying the calculations using artificial intelligence on a more advanced computer such as Bridges’ successor system, the Bridges-2 platform.