Destruction of coastal habitat doesn’t just affect wildlife—it endangers human lives and impacts employment and the larger economy. Working for the Louisiana Coastal Protection and Restoration Authority (CPRA), a team of government, industry and academic scientists has used PSC’s Bridges and Bridges-2 to create a simulation of storm effects on the state’s coast. The team validated that tool by simulating five historical hurricanes in the region. Predictions from further simulations will underlie the upcoming 2023 Coastal Master Plan to help state policymakers decide on risk reduction and restoration projects.

Hurricane Katrina in 2005 looms large among disasters along the U.S. Gulf Coast. But the problem neither started nor ended there. There’s the 1856 Last Island hurricane that devastated the Louisiana and Mississippi coasts. The deadly Galveston, Texas, hurricane of 1900 killed an estimated 8,000 people. More recently, in 2010 the BP Deepwater Horizon oil spill devastated marine and coastal life throughout the Gulf—not to mention the spill’s devastation of the region’s $4-billion-a-year fishing and tourism industries. Land loss in coastal areas can also affect the land-based economy, by making places disappear.

“This is an existential question … we’re literally talking about land disappearing. Since 1927 … the [Louisiana] coastal area has lost about 2,000 square miles of land. The work that we’ve done has a niche in terms of the master plan and looking at [the problem] over the next 50 years. We’re looking at hundreds to thousands of square miles of additional loss if we don’t take action.”—Jordan Fischbach, The Water Institute of the Gulf

When we talk about the environmental health of coastal regions, then, we’re talking about risk to human lives and livelihoods, not just to wildlife. Since 2012, the CPRA has produced iterative master plan updates, which evaluate the effects of storm surges and their associated waves on the state’s coastlines. Louisiana’s regulatory agencies and legislature use the current Master Plan to decide which protective and restorative plans to pursue.

“We were set up after Hurricane Katrina to combine scientists and people in different agencies who had expertise in the coastal area together in one place to try to mitigate and combat that loss. What our team does is, every five or six years, revisit where we are and conduct predictive modeling to think about what projects and tools we have available to mitigate land loss and reduce risk to coastal communities … And now we’re working on the 2023 Coastal Master Plan.”—Elizabeth Jarrell, CPRA 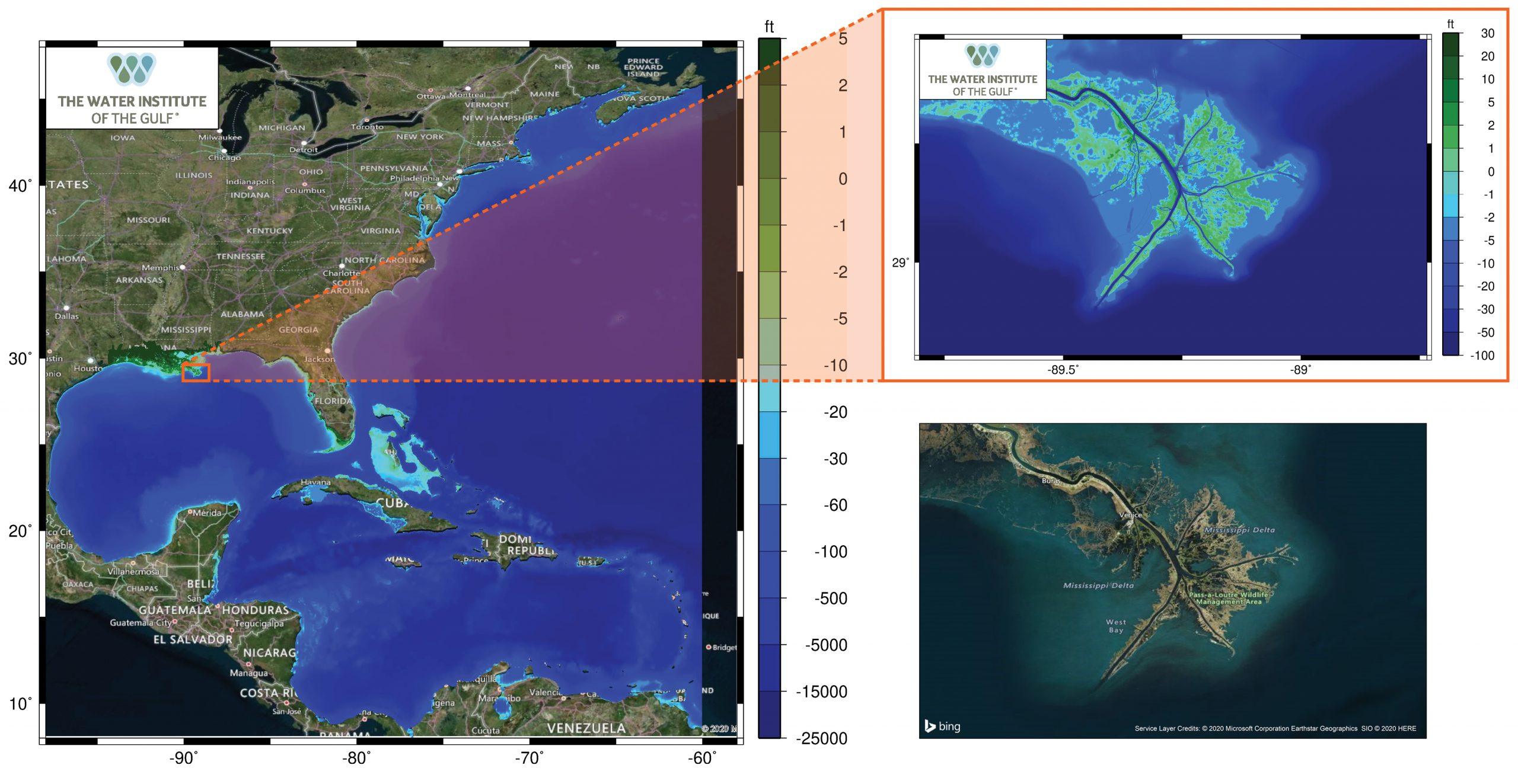 Simulation used for the Louisiana Coastal Master Plan. Inset shows the comparison of features in the Mississippi River Bird’s Foot delta in the model (top right) and in satellite (bottom right).

Using the simulation power of PSC’s Bridges and Bridges-2 advanced research computers, Zach Cobell of The Water Institute of the Gulf, working with a team of scientists and state officials from government, industry and academia that included Jordan Fischbach of the RAND Corporation, who recently moved to The Water Institute; Elizabeth Jarrell, Sam Martin and Eric White of the CPRA; and David Johnson of Purdue University has created a simulation tool to predict and evaluate the effects of different storm scenarios on the Louisiana coast.

Predicting future coastal damage isn’t simply a matter of running a simulation and getting an answer. For one thing, small differences in the conditions on a given day when a hurricane forms can make big changes in where and how hard it hits land—or if it peters out without landfall. By creating many simulations under different conditions, scientists can see the uncertainty of their predictions. When applied to a number of broader storm scenarios, it also provides policymakers with a range of possibilities, from the likely to the rare, allowing them to balance extent of damage from a given scenario against its probability. Specifically, the Louisiana team used the ADCIRC (ADvanced CIRCulation) model for their simulations.

“We have to simulate many different hurricanes [of] different strengths, different landfall locations, and how they affect the state in different ways. Each set of hurricane simulations … takes about 90 runs, with each one using about 128 processors … [10,000 simulations] just can’t be done without a large, dedicated resource [like Bridges-2].”—Zach Cobell, The Water Institute of the Gulf

Bridges and Bridges-2 offered hundreds of processors with the ability to communicate with each other quickly. Beyond that, Bridges-2 provided a special-built ability to connect efficiently with the Internet not present in most supercomputers. This enabled the Louisiana investigators to create a Web-based portal that is allowing more streamlined collaboration among team members. Ultimately, the portal will allow the public to see the results, support useful interpretation of the data,  and allow other researchers to download the data for further study. PSC Senior Web Platform Developer Juan Puerto and the center’s Director, Shawn Brown, worked to help the team get up and running on Bridges as well as make a smooth transition to Bridges-2, as part of the new system’s Early User Program.

“[One of the ideas] of Bridges-2 was … not only to have the compute servers hooked up to the large output storage but also [through virtual machines] to hook up Web servers to it … We’re to disseminate data effectively because the data is tied not only to the computer side but also to the Web services side of the machine.”—Zach Cobell, The Water Institute of the Gulf

In their initial work with Bridges and Bridges-2, Cobell spearheaded a comparison of their computer simulations to the real-life hurricanes Katrina, Rita, Gustav, Ike and Isaac, as well as their effects on the coast. The results were encouraging, with the simulations matching the real storms with an “R-square” of 0.76 to 0.91 (with 1 being the best possible). They’ve also begun simulating a series of “synthetic” storms that may happen in the future, as well as a less-computationally demanding commodity-computer-based risk analysis of possible preventive measures to defend against these scenarios. Their 2023 Master Plan will help policymakers assess and develop an updated protective strategy.

You can view the January 2021 update on their storm surge and wave model here.

You can get an update on the Coastal Protection and Restoration Authority’s work here.